Here you find all the information on how to connect all the hardware components and how to setup the optional hardware connections, if needed:

All components are regular consumer available components, nothing special is required to build a Ruby configuration.

Note: All hardware components are plug and play; that is, you can add/remove radio cards, extension boards, change cameras and so on, as needed. On the next power up Ruby will detect all the hardware changes and adjust according to them.
The only exception is the Pi itself. When you change the Pi board, you should flash new software images for it (that is, use a fresh install when changing the Pi boards).


Note: You can mix and match hardware as needed. That is, you can use different Pi boards for vehicles and controllers and use different radio modules on the same link (assuming they do support the frequency you will be using).


Note: These cards have been tested as working, but any cards with those chipsets will work just fine.

If you are new to electronics and DYI projects, it's recommended you start with the basic wiring and connections as in the pictures below as it's easier and faster to do and have a system up and running: 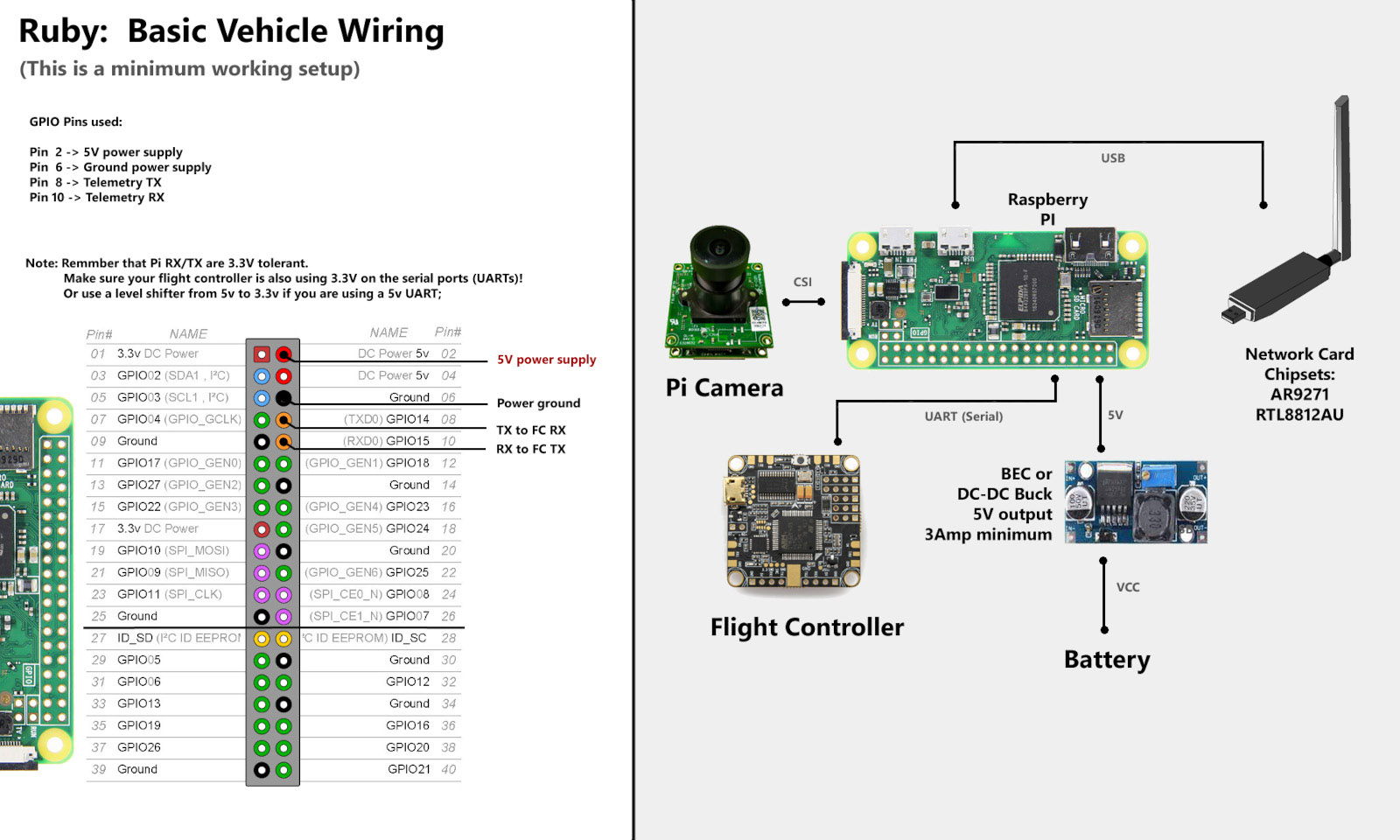 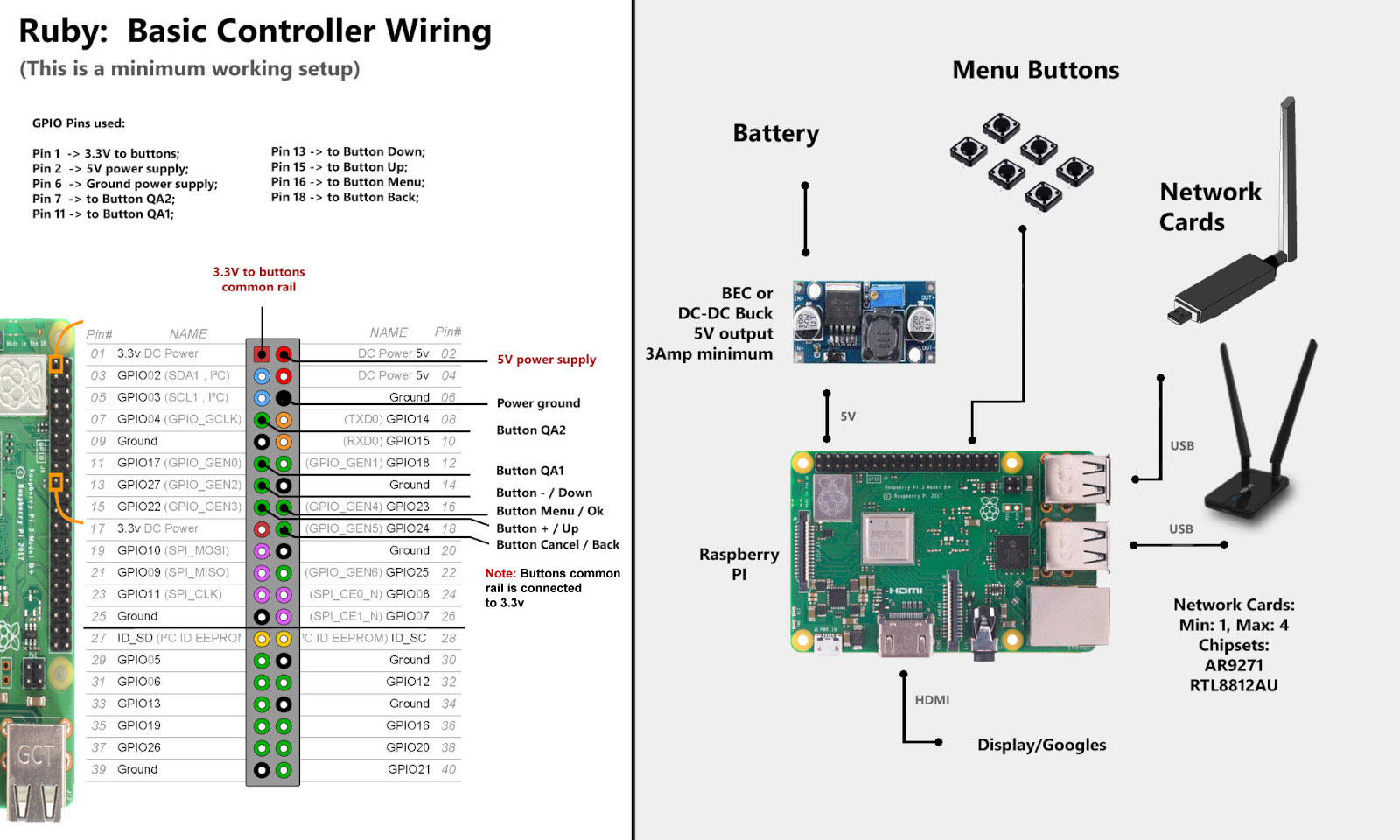 If you have critical usage scenarios or you plan to use Ruby in environments with vibrations, the recommended wiring and connections are as in the pictures below. Basically replacing all USB cables and connectors with wires that are soldered at each end. This gives a more robust system in terms of reliability and resilience to vibrations: 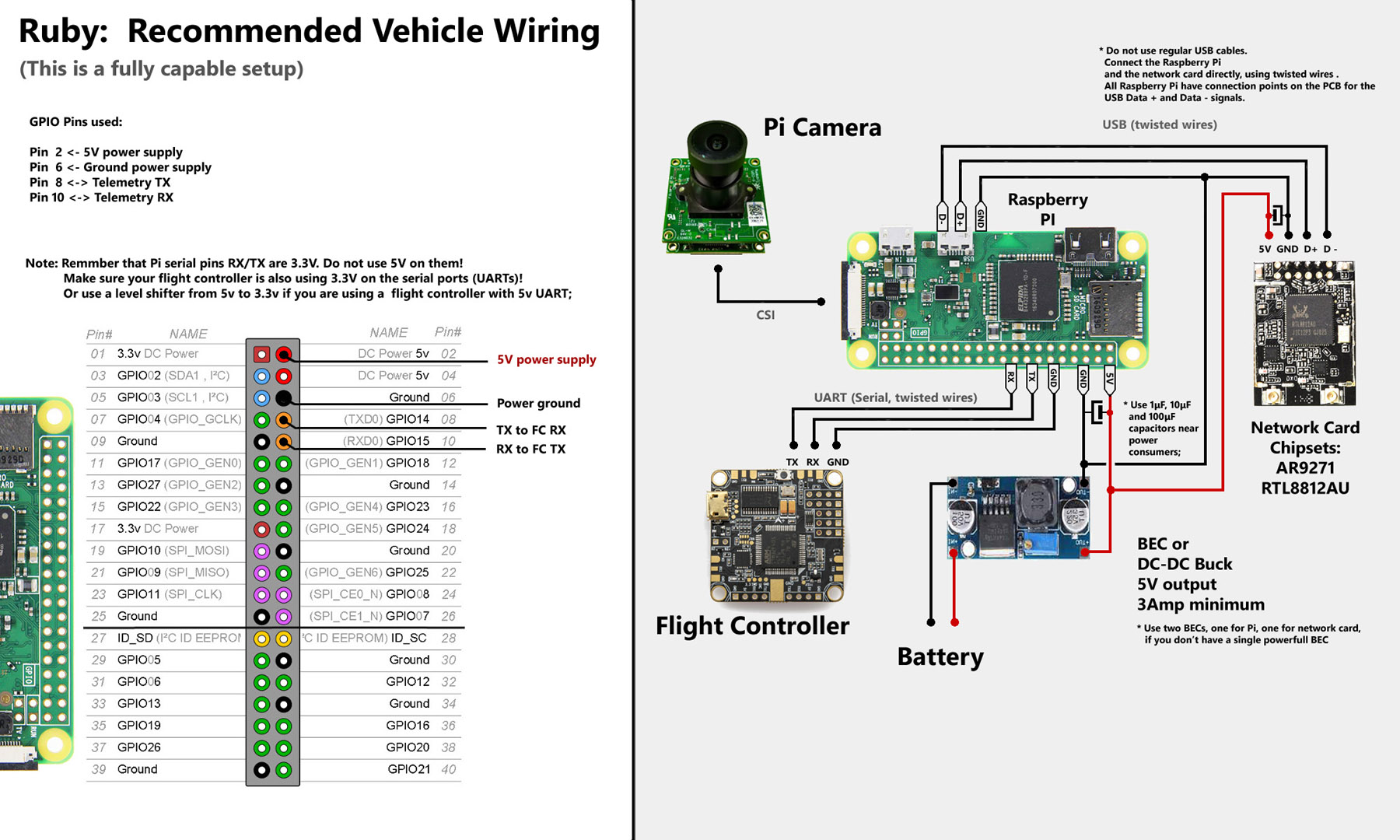 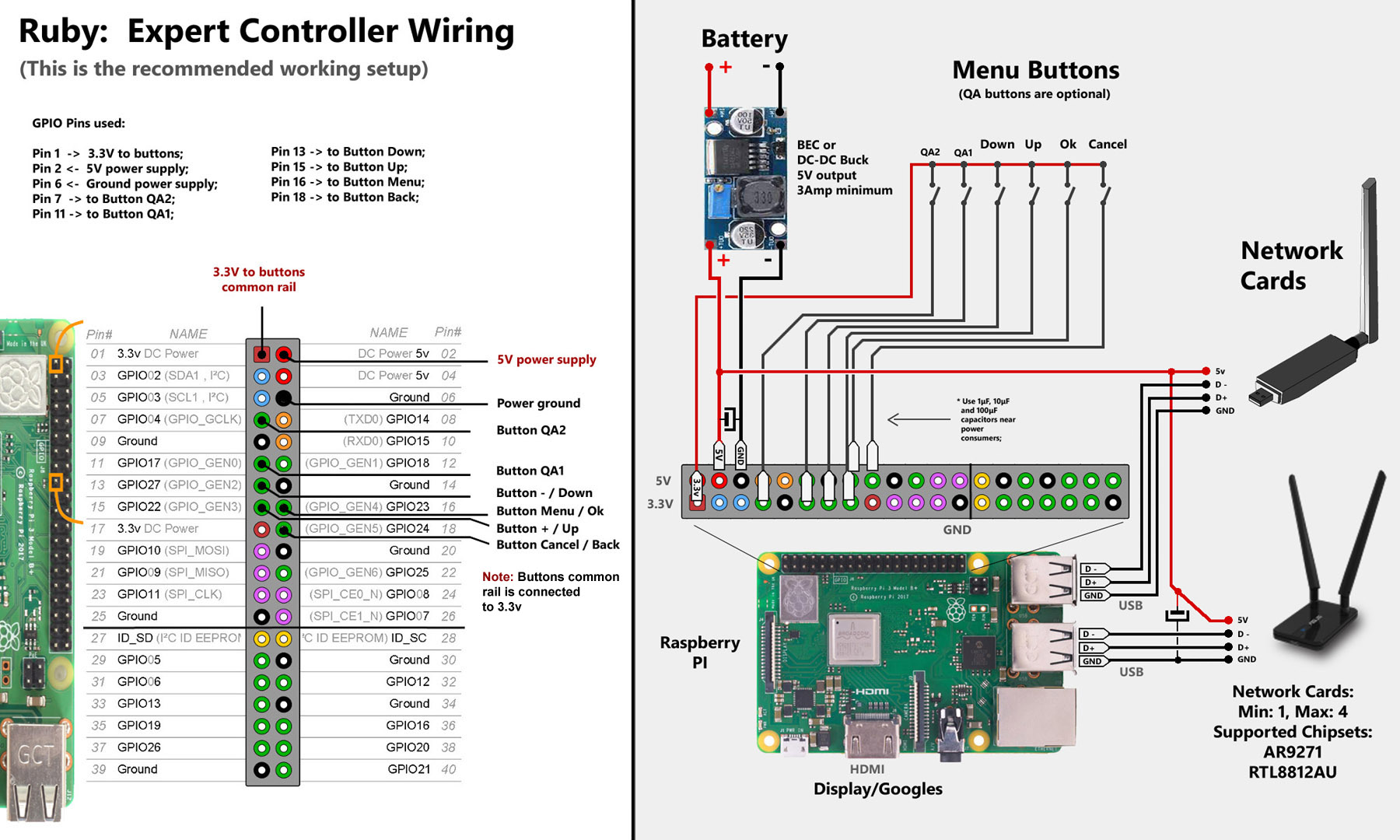 It is recommended that you wire directly the USB connections, from Pi to the radio cards, to not use USB cables and connectors, to avoid vibration issues, using the points on the Pi board that give you direct access to the USB data lanes, as in the pictures below: 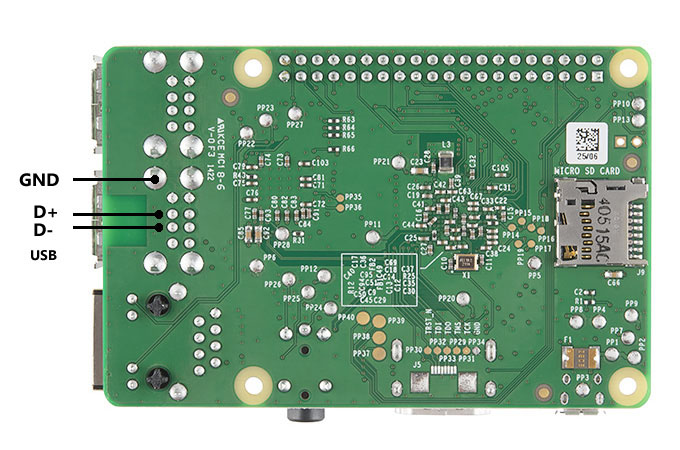 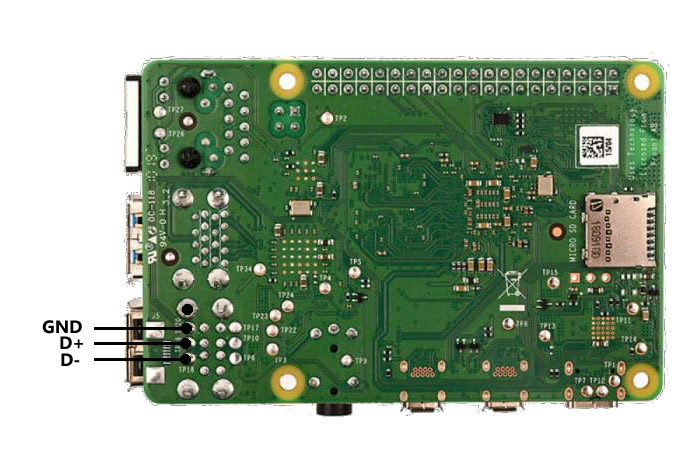 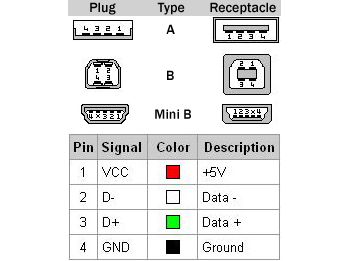 The user interface on the controller can be accessed in Ruby using 4 push buttons for: Menu, Cancel, Up and Down. There are also some optional buttons, that enable auxiliary functions in Ruby like starting a video recording, taking a picture, changing OSD layouts, changing camera settings on the fly and more. They are not mandatory, but make life easier and the user experience more enjoyable.

If you choose to use buttons for interface navigation, you need to wire the buttons as in the pictures below. There is a common rail to all buttons, connected to 3.3v and one individual connection from each button to a GPIO pin on the Raspberry Pi:

You can assign what actions to do when pressing the Quick Actions buttons from the Preferences menu:

There are few other hardware connections you can make to Ruby, that are optional, but can be used if needed.
They are as follows:
* A LED that will blink when video recording is turned on (on the controller side);
* A LED that will blink when there are major hardware or software issues (on the controller side);
* A GPIO pin that you can use to force a Pi to boot as a vehicle/relay, even if it has no camera (on the vehicle side);

The wiring for those is as in the picture below: 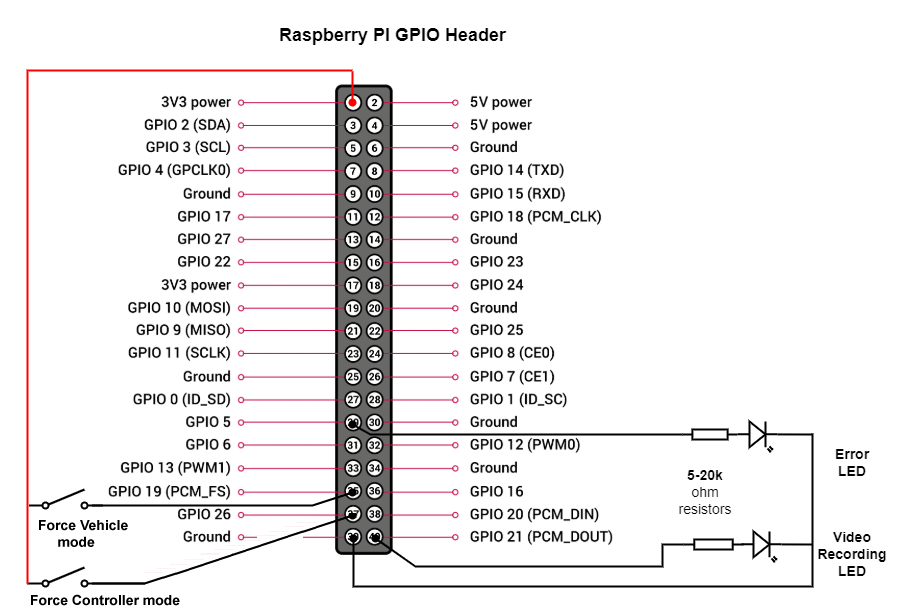 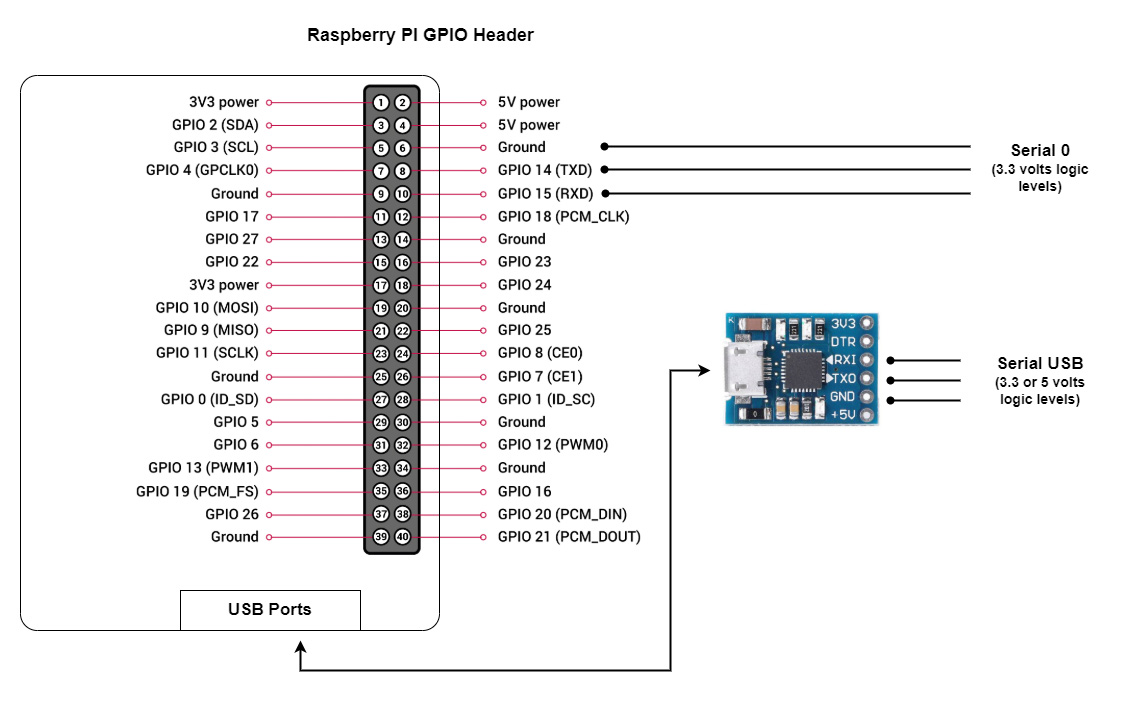 Accessing serial ports on a Raspberry Pi
Note: Use only brand name USB to serial adapters or ones with CP2109 or CP2102 chipsets. The USB serial adapters with CH340 chipset are not supported.

All available serial ports will be shown in the Ruby UI interface and you can change the parameters and usage for each individual port. 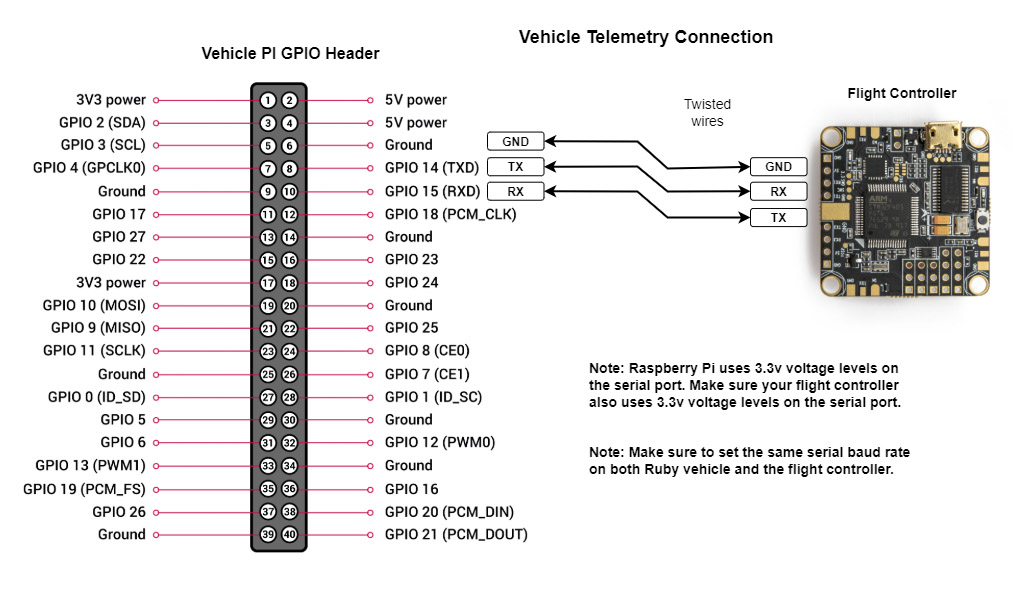 You can add optional hardware components to Ruby controller that will extend the functionality with new features.

Optional peripherals that can be attached to the controller

To expand the I/O capabilities of Raspberry Pi, to add more UART interfaces, analog inputs, SBUS/IBUS/PPM RC input and other future extensions, a small Raspberry Pi Pico is connected to the Pi controller using the I2C interface.
The add-on Pico is powered directly from the main Pi:

Connecting a Pico Pi to the controller Pi

To add peripherals to the Pico Pi, use the following diagram:

Connecting I/O peripherals to Pico Pi
Note: Raspberry Pi Pico is using 3.3v levels on the GPIO pins, but from the tests done, it can handle just fine 5V IBUS/SBUS input. You should add a 5v -> 3.3v level shifter on the IBUS/SBUS input if your source signal is using 5v levels.

You need to flash the Ruby software on your Pico. See the Downloads section for instructions on how to flash a Raspberry Pi Pico and to get the latest software for the Pico. 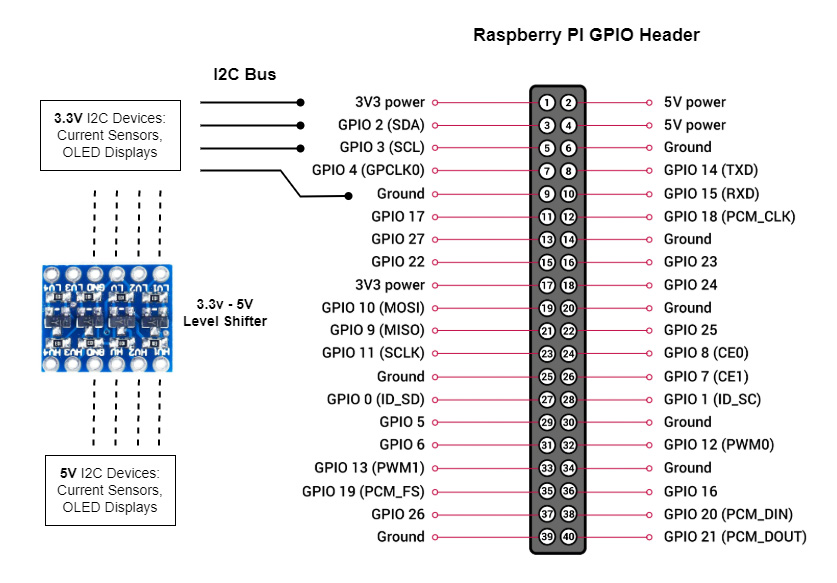 Using the I2C bus on the Raspberry Pi